To DAO or not to DAO

Last night I had the most interesting experience having been invited as a guest for a Russian cryptocommunity group to share my experiences with Decentralised Autonomous Organisations (DAOs) in the crypto space.

The call was energetic and I’m very grateful to Sergey for hosting, Yurii and Daria who helped translate every conversation throughout the two hour session in English for me. Yup. That’s right. Two hours… clearly DAOs have piqued the interest of this group.

However, because DAOs can be a new subject to a lot of people, I’m inspired to write the following summary DAOs for beginners as follows.

DAOs are like companies but without CEO or board of directors.
Instead, the funds within a DAO are managed by either community (voting) or code (smart contracts).

If the killer app for

Then the killer app for DAOs is money management.

That is why the lowest hanging fruits in terms of use cases for DAOs are:

In April 2016, the first ever DAO was launched to attract developers to build dApps on top of the Ethereum blockchain. It was very similar to when Steve Jobs of Apple announced a $100 million fund to attract people to build apps for the AppStore… except in the case of Ethereum, it would be done in a decentralised way without a central body deciding what apps are good for funding and which are not. The people within the DAO gets to decide.

Within two weeks, the DAO raised $150 million from 11,000 enthusiastic members. However due to loophole, a hacker managed to steal $50 million of ETH from the DAO.

So, for threes years the subject matter of DAOs went quiet and ICOs became the norm. But we know how that went.

80% ICOs did not deliver their promises or were scams.
(FYI, ICOs are tokens issued in exchange for investors’ money)

3 / Why are DAOs growing in popularity

A scary looking DAO no doubt but one which provably worked.

Within the Ethereum ecosystem, I think there is fair amount of consensus that Moloch DAO is largely credited for rekindling interest that DAOs could work.

MolochDAO was launched at ETHDenver 2019 to manage grant funds for the development of ETH 2.0. Within a short time (Feb – Oct 2019) various groups have followed in its footsteps, forking its smart contract to create new DAOs e.g. MetaCartel and MarketingDAO.

Plus, instead of building your own DAOs from scratch and go through the same kind of vulnerabilities of the past, new tools have emerged for users to build their own DAOs easily e.g. Aragon & DAOstack.

This was how I got introduced to DAOs at Devcon V in Japan and have been actively involved with DAOs ever since. 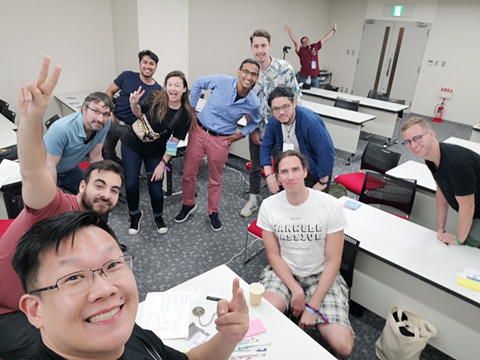 DAOs was one of the hottest topics @ Devcon V. People had to sit between the aisles to be included in the conversation!

DAOs are at best still experiments. And will continue to get tested especially when they do scale and a lot of money is involved.

One of the largest DAOs right now is MakerDAO, with over $300 million of ETH locked and managed in its smart contracts as of time of writing. That’s a huge honey pot for bad actors to attack.

However, when done right, DAOs have the potential to solve offer better transparency of funds, coordinate work and people, get things done, resolve disputes and scale quickly.

There are two paths you can choose to learn about DAOs

Having conducting 8 workshops in Southeast Asia over the last 6 months on DAOs, I realise that 80% of you are probably not interested to start a DAO, which makes sense as not everybody wants to start their own company anyways.

Instead, you probably are looking for some remote work, side income or something meaningful to contribute in this space. If this is you, I’d be writing a separate article of notable DAOs you can consider participating in. This is the easiest way for you to experiment with DAOs… join one, earn reputation and resources for your time spent in the DAO.

If you’re planning on start a DAO, I’d recommend you to design your DAO first using the DAOcanvas. It’s a simple 6 page tool which you could be spending at least six hours on. But too many people launch their DAOs first then ask the hard questions later.

This tool will be invaluable to help you gain clarity so that you will higher chance of success running a DAO.

If you’ve ever been in a Zoom chat recently where a conversation suddenly transforms into a noisy village meeting. This is very common in DAOs.

So, I have come to a conclusion.

Decentralised coordination is going to be messy as long as humans are involved. Everybody is going to have an opinion thus it is more difficult to gain consensus and agreement within a DAO. The only DAO that functions with minimal human intervention, in my opinion, is Bitcoin.

However, this is based on my current experience with DAOs. A huge problem I notice is a lot of DAOs don’t have a leader because they don’t want a single point of failure and they don’t want to be centralised at all.

That is why for the BitcoinMalaysia DAO, we are going to

And once we have a working model, gradually relinquish decision making power so that we can deliver the decentralised outcome we desire. Satoshi Nakamoto did it same way with Bitcoin. He set the direction, made sure his model is functioning before completely disappearing into obscurity.

DAOs are exciting. Do you agree?